I conducted a survey along the northwestern border of Illinois (roughly Quincy to Galena) for the potentially invasive soybean gall midge; we didn’t find it, and have never observed it in Illinois, so that’s good news. What I did see in that part of the state was (1) more stink bugs than I’m used to seeing up there; (2) several isolated areas with spider mites damage (some of this was old damage, particularly in those areas that received heavy rains in the last few weeks; those who have remained dry should remain vigilant); and (3) plenty of northern corn rootworm beetles once I got north of I-80. It’s worth taking a look at your R5-R6 soybeans and seeing what stink bug populations are like; remember, the economic threshold is 1 per row foot or 9 per 25 sweeps.

Diseases continue to pop up, and most will have minimal to no real impact on crop yields. However, some late-season diseases can impact standability and yield. Start checking for stalk rots in corn fields as they begin to dry down. Stalk rots affect the standability of your corn, which can result in some lodging and harvest difficulties. Late-season diseases such as sudden death syndrome, brown stem rot, and red crown rot all have very similar-looking symptoms. If you find plants with interveinal chlorosis/necrosis and defoliation, be sure you either determine the true cause of the disease yourself or send a sample off to the University of Illinois Plant Clinic for diagnosis. Future disease management hinges on an accurate diagnosis. Refer to my recent blog post on the importance of late-season scouting in soybeans.

I also went to the red crown rot study I am collaborating on at the Orr Agricultural Center near Baylis. We are seeing a lot of disease incidence and severity in this field that was inoculated. However, we are sure that this disease is out there and more prevalent than we realize. If you see sudden death syndrome-like symptoms, please let me know. A graduate student from the University of Kentucky is looking to conduct a survey in the coming weeks to gain a firmer grasp on the distribution of this disease in Illinois and Kentucky.

This past week has been another relatively dry one in south central Illinois, with only a weak storm system passing through over the weekend delivering around 0.25-0.5 inches at maximum, and much less in most areas. But with the mild temperatures, available soil moisture has been sufficient in most areas with little signs of moisture stress. There have been a couple reports of soybean diseases in the more northern parts of the region, where heavy rains and waterlogged soils were prevalent 3-4 weeks ago. However, it is not yet apparent how widespread or severe this issue is. Corn disease pressure still appears to be minimal. With many corn field moving into early dent, diseases may take hold are unlikely to have much effect on yield potential at this point.

The rainfall of the past week brought the area about .05 inch or more of much needed rain. Soybean pods are now filling and plants in R% stage. Brown stem rot (BSR) is beginning to show up in a few fields. Noted stinkbugs and bean leaf beetles present in some fields. Field corn is in dent or R% stage with molds present on ears suffering kernel damage. Tipback is evident in all corn fields visited. Double-crop soybean fields look good after recent rains.

Two weeks after experiencing tremendous rain events (9+ inches), areas of Northwest Illinois have received some relief with temperate and dry conditions to aid with grain fill. Corn (R4/R5) and soybeans (R4/R5) are progressing as we head into September. With ample rainfall events, the crop likely has enough moisture to take us to maturity in many cases.

Overall, corn disease has been found with incredibly low incidence in 2022, pointing to the timely rains followed by intermittent hot, dry conditions throughout the season. However, heavy rains and subsequent ponding that followed left their mark with downed crops; in fields without completely lost crops, pressure from soil-borne diseases may be higher moving into that latter portion of the growing season. Impacts on soybeans and corn from these storms and subsequent ponding will not be fully understood until the combines are rolling.

This recent week brought widespread rainfall to Northeastern Illinois, most areas receiving 1+ inches. The precipitation was a relief to some, and a continuation of a wetter pattern to others. Reports of White mold in soybean have been shared in Kane County. This is an easily identifiable fungal disease. As its name implies, once established symptoms include white, fluffy growth on the stems and pods. Favorable conditions for development include cool and wet conditions. Fungicide applications are labeled for White mold, but best results are normally obtained from earlier applications, often at R1. Later applications are much less likely to be effective. Once symptoms of White mold are evident, fungicides will have no effect on reducing the disease. One management recommendation is to harvest White mold infected fields last. This will help prevent the spread of the overwintering structures of the disease (sclerotia) to clean fields. Clean combines thoroughly at the end of the season to avoid infestation of fields. White mold photos provided by Randy Pauli

Most corn in northeastern Illinois fields is currently in dent stage (R5). Does this mean that yield has already been made? While we are certainly getting closer to the finish line, kernel dry matter at the beginning of dent is about 45% of its final accumulation. The approximate 30-day dent stage progress can be followed by observing the “milk line” that indicates the boundary between the milky and starchy areas in the kernel as it matures. We will continue to hope for favorable conditions as we complete grain fill in the 2022 corn crop. 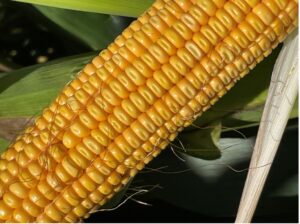