What a difference a year can make. Many of us will recall the record-breaking warm temperatures of last March across the Corn Belt of the United States. Those temperatures fueled a rush towards planting in April and the earliest emergence of western corn rootworm adults that I have witnessed. On June 7, 2012, I reported that severe rootworm injury had already occurred in a cornfield located in Cass County along with plentiful adults that were causing considerable injury to the corn leaves. I don’t anticipate a similar early emergence this season with snow still commonly found in many fields across the northern one-half of Illinois.

As I have done for many years, I used hand-held clickers (Turning Technologies) to poll producers at the 2013 Corn and Soybean Classics held in several Illinois locations in January.  Growers were asked if they intended to plant a Bt hybrid for corn rootworm protection in 2013? On average, for the five locations, nearly 92% (n = 568 responses) of the producers indicated that Bt hybrids would be targeted at corn rootworms for the upcoming growing season (Figure 1). The range in “yes” responses was 87.6% (Moline, n = 97 responses) to 95% (Champaign, n = 121 responses and Malta, n = 88 responses). Not surprisingly, and similar to previous growing seasons, the use of Bt hybrids will remain a key tactic used by producers in 2013 for corn rootworm protection. 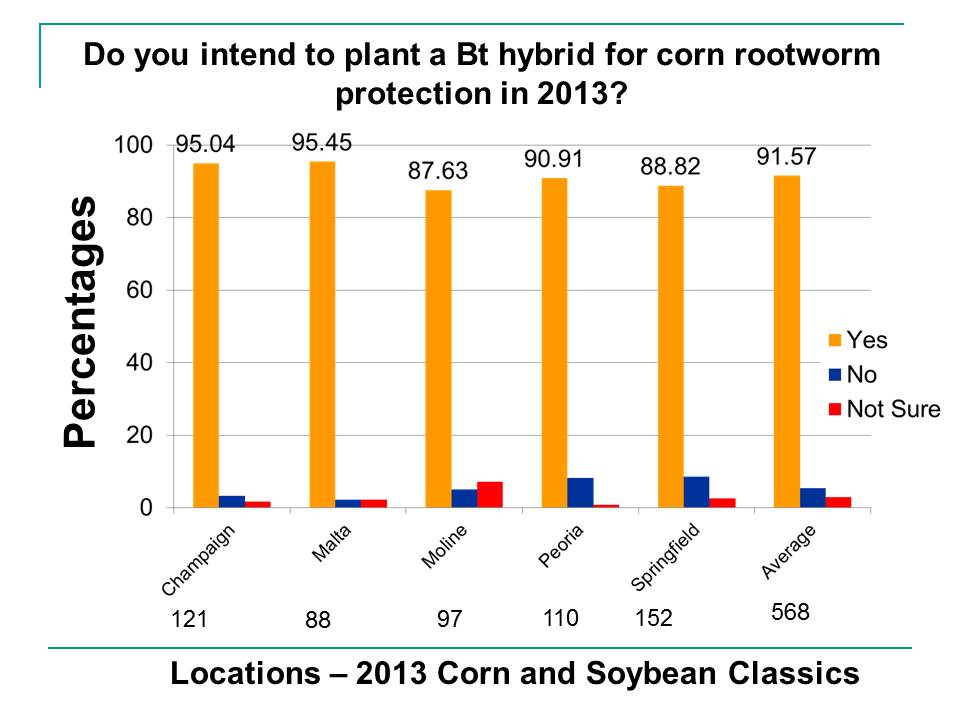 As more pyramided Bt hybrids enter the market place, the type of refuge used will continue to change in a very significant manner. In 2012, the traditional 20% structured refuge was still the dominant refuge approach used by producers in the Corn Belt. Based upon responses received at the 2013 Corn and Soybean Classics, this refuge strategy will no longer remain dominant for Illinois producers. Overall, the most common refuge (Figure 2) that will be used by producers who took part in these regional meetings will be the 5% seed-blend (refuge-in-a-bag) with 43% (n = 572 responses) indicating they will be moving in this new direction. The second most common refuge tactic will be the 10% seed blend (refuge-in-a-bag) with 31% relying upon this approach. Together, these data indicate that nearly 3 out of 4 producers who responded to this question will use a seed-blend as their refuge management strategy for corn rootworms. The advantages of a refuge-in-a-bag (RIB) are straightforward – convenience, ensured compliance, and favorable from a resistant management vantage point for western corn rootworms (based upon emergence patterns and inter-field dispersal dynamics of adults). 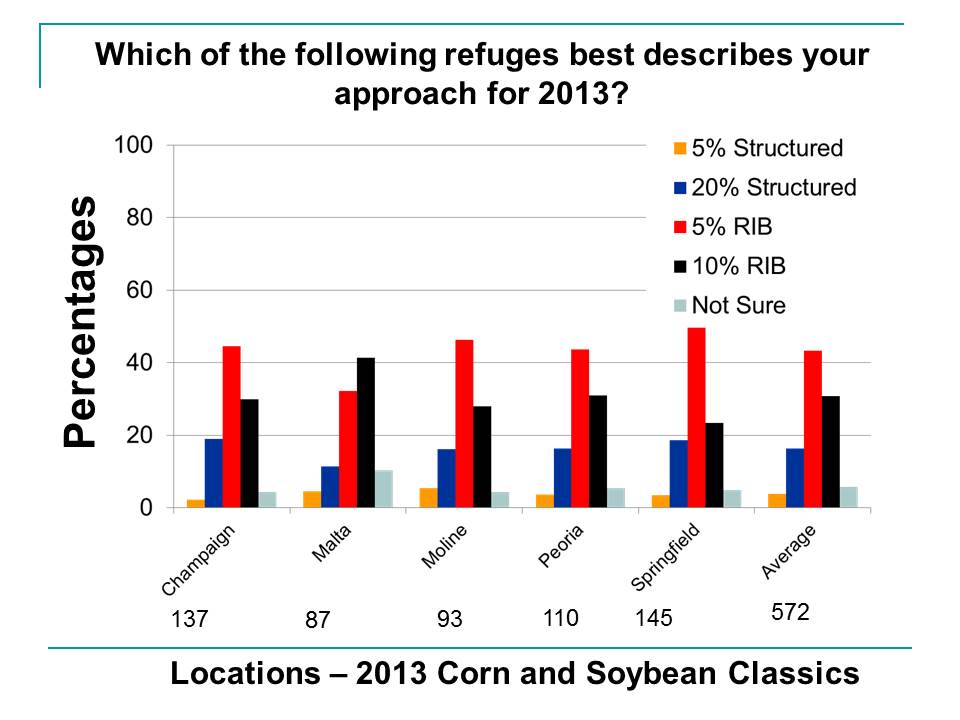 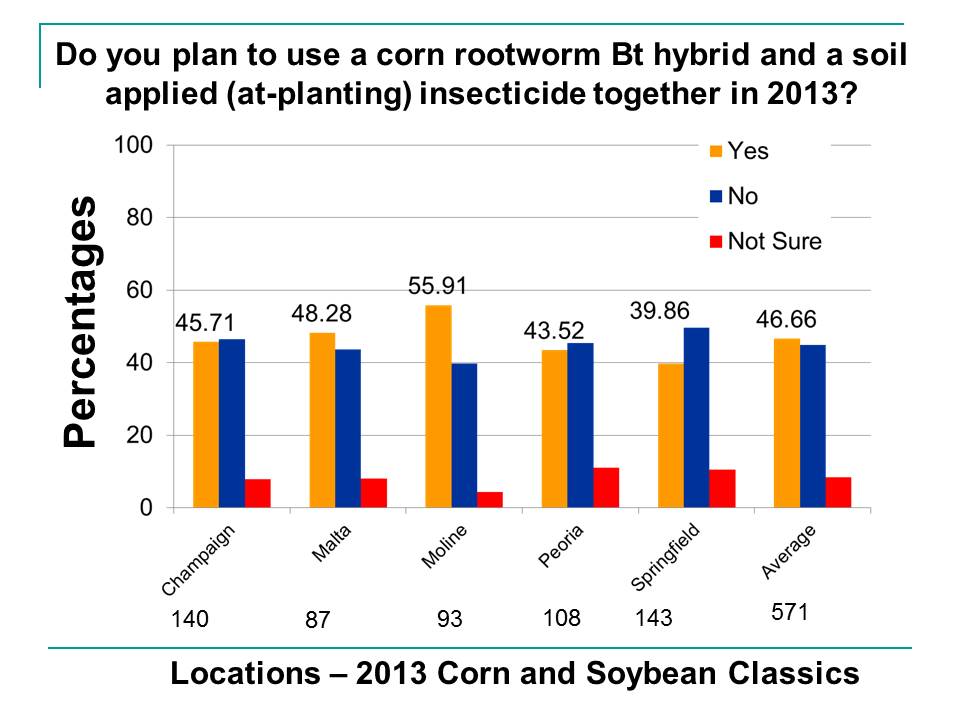 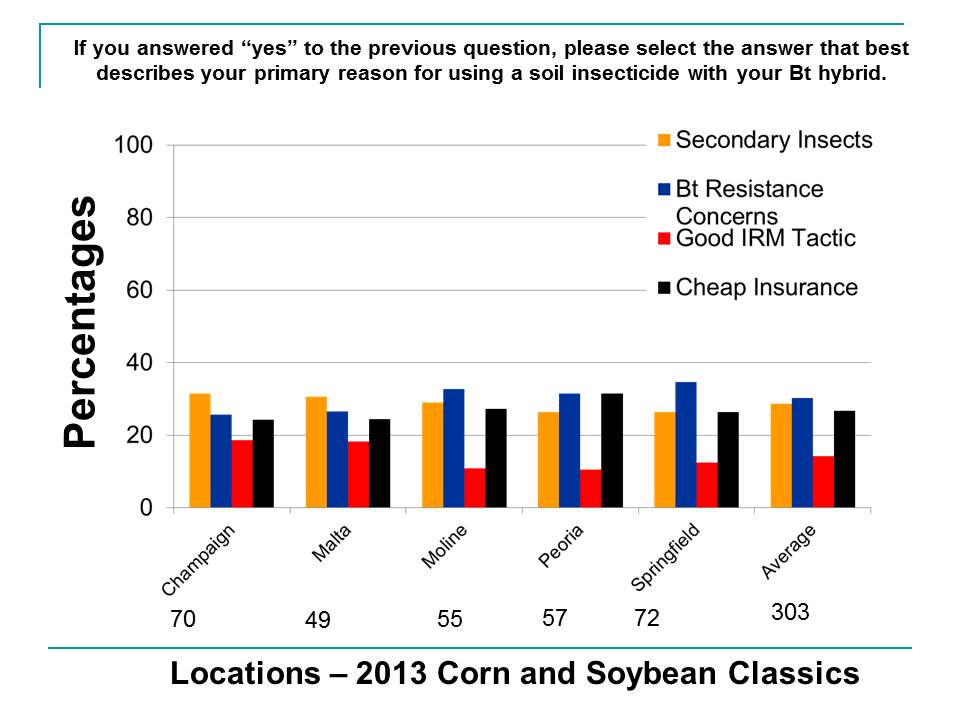