The Illinois Statewide Corn and Soybean Insect Survey has been occurred in eight of the last nine years (2011, 2013–2019). These surveys have been conducted with the goal of estimating densities of common insect pests in corn and soybean cropping systems. In 2019, 40 counties representing all nine crop reporting districts were surveyed, with five corn and five soybean fields surveyed in each county.

Within the soybean fields surveyed, 100 sweeps were performed on both the exterior of the field (outer 2 rows) and interior (at least 12 rows beyond the field edge) using a 38-cm diameter sweep net. The insects collected in sweep samples were identified and counted to provide an estimate of the number of insects per 100 sweeps (Tables 1 and 2). 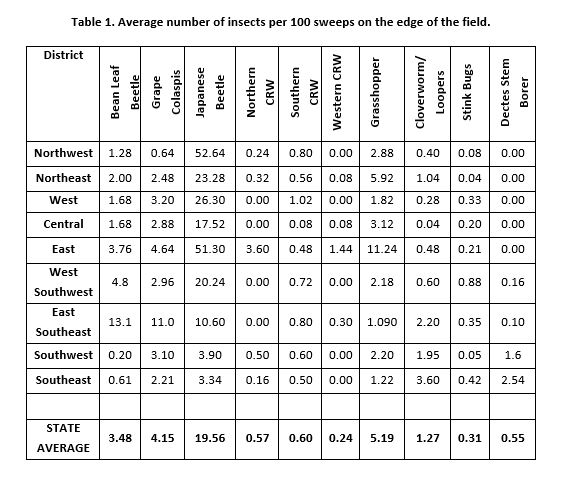 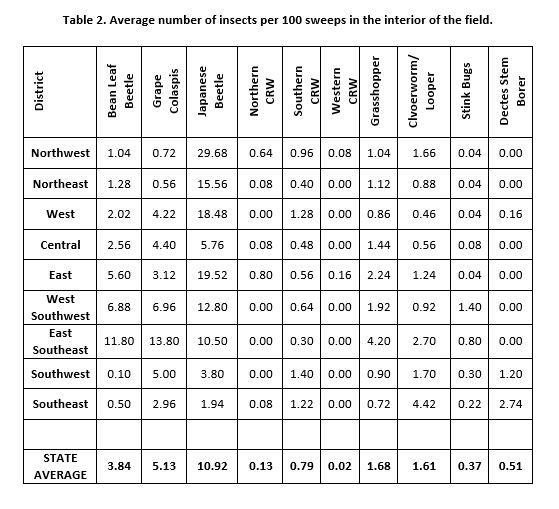 A common question during the growing season was, “How would insect populations respond to the severe cold events from the 2018/2019 winter following by the record breaking precipitation in the spring?” A very simple answer? Not well. For the most part, insect numbers were lower when compared with our 2018 survey.

While Japanese beetle populations were trending higher statewide in 2018, district averages declined everywhere with the exception of the East crop reporting district. High averages in both Iroquois and Livingston counties pulled the district average up. Growers in western and northwestern Illinois were happy to see lower numbers after extremely high Japanese beetles present in 2018 (Figure 1).

Included for the first time in the soybean survey, was the Dectes stem borer. While present in Illinois for many years, recently this pest, this insect pest has been garnering attention from soybean growers in southern Illinois for the past couple of years. Soybean sweeps did confirm higher numbers in the southern part of the state, particularly in the southeast, but was present at low levels in other districts as well (Figure 2).

As expected with the very wet spring, western corn rootworms populations remained very low in 2019. In addition to sweep samples in soybeans (Figure 3), cornfields were sampled for western corn rootworm by counting the number of beetles on 20 consecutive plants beyond the end rows of a given field—a beetle per plant average was calculated for each field.  Despite lower statewide averages, there are local areas where populations were higher. This was especially evident in Iroquois and Livingston county soybean fields that were also contending with Japanese beetles. In corn, Christian, Sangamon and Greene counties each had a few fields with higher western corn rootworm numbers compared to others in those respective districts. 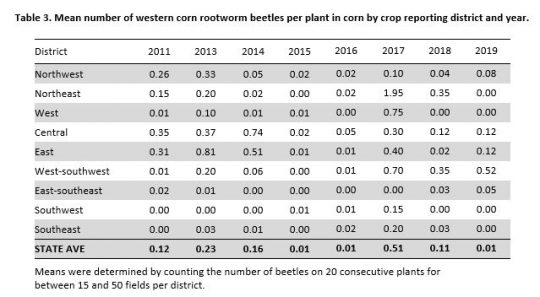 Funding for survey activities was provided by the USDA National Institute of Food and Agriculture. This survey would not be possible without the hard work and contributions of many people, including Cooperative Agriculture Pest Survey Program interns Evan Cropek, Calli Robinson, Jacob Styan, Carson Robinson, Morgan Rothermel, and Mitch Clodfelter.