Approximately two weeks ago, only a few (11 reported as of July 16) dicamba-related complaints had been filed with the Illinois Department of Agriculture (IDOA), and some held aspirations that the magnitude of off-target issues would be less this year than during the two previous seasons.  Today, it appears those hopeful aspirations are being replaced by the harsh reality that the magnitude of off-target issues in 2019 might be either similar to or possibly exceed those of previous seasons.  By the end of business on July 31, IDOA reported 191 dicamba-related complaints, 132 of which were received between Monday and Thursday of this week.

IDOA also indicated there has been an increase in the number of phone calls during which the caller wanted the Department to know of a damage incident but was unwilling to file an official complaint.  Many callers indicated they wanted to have the incident recorded but didn’t want to “get their neighbor” in trouble with a formal complaint.  Calling IDOA to report an incident of dicamba damage is not the same as filing an official complaint.  IDOA cannot take official action with of a verbal report of damage; a completed pesticide misuse complaint form must be filed to begin the complaint process.  If you choose to file a complaint with IDOA, time is of the essence. The pesticide drift complaint process is started by filling out a complaint form which can be found at: https://www2.illinois.gov/sites/agr/Pesticides/Documents/pesticidemisusecomplaintform.pdf or by calling IDOA’s Bureau of Environmental Programs at 1-800-641-3934 (voice and TDD) or 217-785-2427.  Additional information on pesticide uses and misuses can be found on the agency’s website at: https://www2.illinois.gov/sites/agr/Pesticides/Pages/Pesticides-Uses-Misuses.aspx

Complaint forms must be received by IDOA within 30 days of the incident or within 30 days of when the damage was first noticed. Complaints filed after that will be kept on record, but no administrative action can be taken.

Once a complaint is filed with the department, a field inspector is assigned the case. In most cases, the inspector will interview the complainant and inspect the site. Various types of samples, such as plants, water, or soil, may be collected for analysis at an approved laboratory.

The inspector may also interview applicators in the area, examine pesticide records and collect weather data in an attempt to determine the nature and cause of the damage. The field investigator will then submit a report to the Department for review.

Both parties will receive written notification if the Department finds a violation and takes an enforcement action. Penalties range from advisory or warning letters to monetary penalties of $750 to $10,000, depending on the type and severity of the violation. Penalties are determined through a point system defined in the Illinois Pesticide Act.

Even if a violation of the Illinois Pesticide Act cannot be substantiated, both the complainant and the alleged violator will be notified in writing of the complaint’s status. Remember, the Department’s role in pesticide misuse incidents is limited to determining whether a violation has occurred. IDOA cannot help complainants recover damages.

The widespread occurrence of dicamba symptoms on soybean for the third straight year is by itself troubling, but perhaps even more troubling are the feeble theories being promulgated to explain the cause of the soybean leaf cupping.  I addressed these in past articles, but it appears science continues to be sacrificed for sales.  So, we’ll take some time to work through these once again.

I would argue dicamba is the only cause of the widespread leaf cupping symptom, but with advancing age and graying hair I hope to be open-minded enough to recognize I might have overlooked other possible causes.  Therefore, I want to address these “multiple causes” with the hope industry representatives can help provide answers or direct me to the published literature where I can find answers to the questions I will pose.

An interesting hypothesis that, if true, likely has been previously researched.  However, I have not been able to locate any peer-reviewed literature that specify or describe the exact (or any, for that matter) environmental conditions that induce the cupping now so prevalent.  If these conditions exist, one would speculate they could be replicated under controlled conditions to confirm their impact on symptom development.  Granted, I have not attempted to complete a thorough review of the agronomy literature, so I hope someone in industry can help answer the following questions:

I had hoped this one was laid to rest last year, but it appears that it is being tossed around again in 2019.  Last year, I posted two comments about AMS and leaf cupping on my Twitter account but since some folks don’t use Twitter I thought I would share my 2018 comments herein:

The purpose of the second Twitter post was to share the results of a replicated field experiment in which we evaluated soybean leaf cupping following application of different rates of AMS.  I shared the data as photographs since, well you know, a photograph is worth a thousand words: 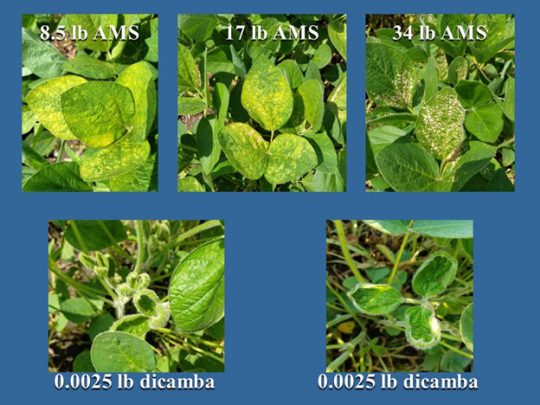 Again, in my fervent attempt to be open-minded, I hope industry can provide answers to these questions:

Millions of Illinois soybean acres have been sprayed with glyphosate + AMS since 1996 without the widespread leaf cupping common since 2017.  Why, then, did AMS all of the sudden cause widespread leaf cupping beginning in 2017 and continuing in 2018 and 2019?  Can anyone please provide peer-reviewed data generated over multiple environments that speculate, suggest, or even clearly demonstrate leaf cupping is caused by AMS?

Yes, tank contamination occurs and I have seen instances of cupping where contaminated application equipment clearly was responsible.  This avenue of exposure was somewhat common in 2017, but less common in 2018 and appears to be even less common in 2019 as applicators gained an enhanced appreciation for sprayer hygiene.  Ag retailers to their credit have invested substantial money and time into segregating mixing systems, tender vehicles, and in many cases installed direct injection systems on their sprayers to keep dicamba isolated from other pesticide mixtures.  They have also extensively contacted growers and mapped the traits of soybean in a concerted effort to manage wind, buffers and “do not spray” label requirements to protect sensitive soybean and other sensitive crops and areas.  If that’s not enough, before applying dicamba in 2019, approximately 3000 licensed Illinois operators completed the process to become licensed applicators thanks to the new label mandate instituted by US EPA for the revised label.  It’s logical to conclude that each of these 3000 applicators operates a spray rig, so is industry suggesting that hundreds of agrichemical facilities and thousands of tender trucks and application equipment in Illinois are contaminated?  Do anyone have physical evidence of this, or is it just more speculation?  If contamination is the cause of even half the instances of soybean leaf cupping, commercial applicators might question the prudence and legal ramifications of applying a product that seemingly cannot be removed from their chemical formulation, transportation and application equipment.

The frequency of entire soybean fields demonstrating uniform cupping symptoms is not suggestive of “multiple causes,” but rather of exposure through volatility of dicamba previously applied.  Multiple university weed science programs have demonstrated volatility of these dicamba formulations can be detected for up to four days after application, yet these results seem to be largely ignored by industry as another possible source of exposure.  Registrants never have referred to these products as non-volatile, but rather with lower volatility than other formulations.  As many have stated previously, low volatility is not synonymous no volatility.  However, industry continues to promulgate theories and speculations that have few (if any) data in their support.  I’m curious if industry will be more transparent with their customers about issues of volatility and recognize this as a potential source of exposure.  Or, perhaps not.