The continual evolution of weed species and populations resistant to herbicides from one or more mechanism-of-action families represents one of the most daunting challenges faced by weed management practitioners.  Currently in Illinois, biotypes of 12 weed species have been confirmed resistant to one or more herbicide mechanisms of action.  Resistance to herbicides that inhibit the ALS enzyme is the most common type of resistance in Illinois.  Waterhemp has evolved resistance to more herbicide mechanisms of action than any other Illinois weed species, including resistance to inhibitors of acetolactate synthase (ALS), photosystem II (PSII), protoporphyrinogen oxidase (PPO), enolpyruvyl shikimate-3-phosphate synthase (EPSPS) and hydroxyphenyl pyruvate dioxygenase (HPPD).  Not every individual waterhemp plant is resistant to one or more herbicides, but the majority of field-level waterhemp populations contain one or more types of herbicide resistance.  Perhaps even more daunting is the occurrence of multiple herbicide resistances within individual plants and/or fields.  Waterhemp plants and populations demonstrating multiple herbicide resistance are becoming increasingly common and greatly reduce the number of herbicide options that remain effective for their control.

1Flumioxazin, sulfentrazone and saflufenacil possess some foliar activity, but greater weed control is achieved when these herbicides are taken up from the soil.

Weed scientists characterize the magnitude of resistance (i.e., how resistant the plants are to the herbicide of interest) by conducting a dose-response experiment in which a range of herbicide rates (often 8 to 10 rates, some more than and some less than a typical field use rate) is applied to plants from the suspect-resistant population and to plants from a population known to be sensitive to the herbicide.  Dose-response experiments are most commonly conducted by spraying a foliar-applied herbicide directly onto plant foliage, but these experiments also can be conducted with soil-residual herbicides applied to soil containing seeds of the populations of interest.  At some time after application (often 14 or 21 days), a measure of plant response (percent injury, mortality, plant dry weight, etc.) is made using both populations, and a statistical equation is used to determine the herbicide rate that reduced the measured parameter by some value (frequently 50% is used for comparison).  The rate derived from the resistant population is divided by the rate derived from the sensitive population, and the quotient is referred to as the resistance ratio; the higher the resistance ratio, the greater the magnitude of resistance to that particular herbicide.  Table 2 presents actual resistance ratios for an Illinois waterhemp population that demonstrates resistance to herbicides from three mechanism-of-action families (triazine, ALS and PPO).  The R/S ratios indicate the population demonstrates a low magnitude of resistance to atrazine, lactofen, and flumioxazin but a very high level of resistance to imazamox.

aHerbicides were applied to the foliage.

bHerbicides were applied to the soil.

Converting the GR50 values to rates of formulated herbicide illustrates that only 0.06 fluid ounce of Raptor was required for 50% control of the sensitive population compared with 7.58 gallons of Raptor for the resistant population.  Clearly, biotypes demonstrating this magnitude of resistance cannot be controlled by simply increasing the application rate of Raptor.  However, the same conversions for the soil-applied PPO inhibitor flumioxazin illustrate that only 0.042 and 0.117 ounce of Valor were required for 50% control of the sensitive and resistant populations, respectively.  These rates are much lower than the typical field application rate range of 1–3 ounces per acre.  Figure 2 illustrates this response by depicting emergence of PPO-resistant (R, back row) and sensitive (S, front row) waterhemp as influenced by Valor application rate (white numbers indicate the rate applied to both pots).  The two pots on the far left were untreated controls while the two pots on the right were treated with 3 ounces of Valor.  Both resistant and sensitive populations were controlled by Valor at rates of 3 and 0.3 ounces per acre.  However, only the resistant population emerged when the Valor rate was further reduced to 0.03 ounce per acre; the sensitive population was still controlled at that rate.  Both populations emerged when the application rate was reduced another order of magnitude. 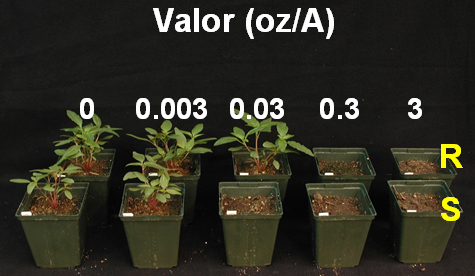 One might be tempted to argue this discussion is irrelevant since field-scale applications of soil-residual herbicides are not made at rates low enough to discriminate between resistant and sensitive plants.  A portion of that argument is valid, but keep in mind that once a herbicide enters the soil environment it begins the process of degradation.  At some point during the course of its degradation, the amount of herbicide remaining in the soil will correspond to these discriminating rates.  The amount of time required for a particular herbicide’s degradation process to reach these discriminating rates depends upon many soil- and environmental-related factors (such as soil texture, organic matter content, moisture, pH, etc.).

So, what might be some practical implications of this?  Consider a waterhemp population that contains a mix of PPO-resistant and sensitive individuals.  All plants in this population (resistant and sensitive) will be controlled by a soil-applied PPO-inhibiting herbicide for a period of time after its application.  As herbicide degradation proceeds, a threshold concentration is reached at which the sensitive individuals are still controlled but the resistant individuals survive.  This provides a selective advantage for the resistant individuals and may partially explain the increasing frequency of PPO-resistant waterhemp populations in Illinois.

Selection for herbicide resistance occurs each time a herbicide is applied, regardless of the herbicide or whether it is applied to the soil or plant foliage.  However, the overall intensity of selection for resistance to any particular herbicide or mechanism-of-action family is reduced when multiple and different tactics are used to control the weed population.  As mentioned previously, not every individual waterhemp plant is resistant to a herbicide.  An integrated weed management approach which utilizes soil- and foliar-applied herbicides applied at labeled rates in combination with other management tactics can help slow the selection for additional resistances in individual waterhemp plants and populations.