The introduction of corn hybrids that expressed two different Bt toxins was an important innovation in Bt technology that offered a way to slow the development of resistance and manage rootworms already resistant to a Bt trait. Because these “pyramided” Bt corn hybrids expressed Bt proteins with two different modes of action, a larva feeding on a pyramid’s roots must have resistance to both Bt proteins to survive.  Thus, pyramided hybrids provided a “second line of defense” against western corn rootworms in areas where some Bt resistance may already be present.

Cross-resistance among the structurally similar “Cry3” family of Bt Cry proteins (Cry3Bb1, mCry3A, and eCry3.1Ab) has further complicated rootworm management (Gassmann et al. 2014: https://doi.org/10.1073/pnas.1317179111). With cross-resistance, rootworms with resistance to one Cry3 toxin were also resistant to the other two. This significantly reduces grower options, as despite the availability of many different commercial Bt corn hybrids, there are functionally only two different Bt modes of action with activity against western corn rootworm beetles. Choosing an effective hybrid requires information about which traits work well against the rootworm populations in a particular field or area and information about which Bt Cry toxins are expressed in different Bt corn hybrids. Information about the Bt traits expressed in commercial Bt corn hybrids can be found in the “Handy Bt Trait Table” (https://www.texasinsects.org/bt-corn-trait-table.html).

Though western corn rootworm Bt resistance is increasing across the Corn Belt, field efficacy trials and bioassays reveal that some susceptibility to one or more proteins remains in most populations.  Furthermore, a recent publication from University of Nebraska (Reinders et al. 2018: https://doi.org/10.1371/journal.pone.0208266), showed that the level of resistance to a particular Bt protein(s) could vary from field-to-field even within a portion of a county. In east central Illinois, we have conducted a series of experiments to examine the susceptibility of local western corn rootworm populations to Bt traits.

Local western corn rootworm populations have been periodically assessed for their susceptibility to the Cry toxins expressed in Bt corn hybrids.  Last spring, a variety of single trait-, pyramided- and non-Bt corn hybrids were planted for a Bt efficacy trial at the UI Agricultural and Biological Engineering (ABE) Farm in Urbana, Illinois.  Laboratory Bt resistance bioassays were also conducted using the offspring (larvae) of rootworm populations collected from the ABE farm during 2017.

Local rootworm pressure has been low for several years. To assure significant western corn rootworm pressure for the efficacy trial, in 2017, the site was late-planted with corn and pumpkins to attract egg-laying adults. The 2018 trial was planted on May 2nd in a 6 x 6 grid of 8r x 9m plots. On July 18th, five roots were dug from each plot and evaluated for rootworm larval feeding injury using the Iowa State University 0-3 Node-Injury Scale (NIS)(Oleson et al. 2005: https://doi.org/10.1093/jee/98.1.1).

Western corn rootworm larval pressure in the trial was only modest leading to a pattern of variable results. The roots of non-CRW Bt hybrids sustained nearly two full nodes of injury (NIS = 1.987 ± 0.335; mean ± SE) (Table 2) which was greater than injury to all of the Bt corn hybrids, except the Cry3Bb1 single trait hybrid. The injury to roots of the mCry3A-expressing single-trait hybrid was not significantly different from injury to the Cry3Bb1- or the Cry34/35Ab1-expressing single trait hybrids.  The lowest NIS (=best root protection) occurred on the two pyramided hybrids, though this was not significantly different from the NIS for the single trait Cry34/35Ab1-expressing hybrid.

While a significant contribution of Cry34/35Ab1 to better root protection is evident from these data, the level of root protection provided by Cry3 traits (i.e. Cry3Bb1- and mCry3A-expressing single trait hybrids) compared to unprotected roots (i.e. non-CRW Bt) would be unacceptable in a commercial setting. Unsatisfactory Cry3 toxin performance is hardly surprising, given Cry3 cross-resistance, prior local evidence of reduced Cry3 Bt toxin efficacy, and current bioassay data (below). In single trait hybirds, Cry3 traits are unlikely to meet root protection expectations.

Table 3. Node Injury Scores (NIS) for the field efficacy trial from Table 2, data were pooled according to Bt-corn hybrid Cry34/35Ab1 protein expression category. Five roots were evaluated per replicate and n=6 replicates per each of the six corn hybrids; n=180 total roots.

Western corn rootworm Bt resistance bioassays. Single-plant Bt resistance bioassays compared the survival of larvae from a suspected-Bt resistant population and a Bt-susceptible population from a USDA laboratory colony (Brookings, SD). Larval survival was measured using corn hybrids expressing single Bt toxins (Cry3Bb1, mCry3A, or Cry34/35Ab1) and their respective non-Bt near-isoline hybrids. The suspected-Bt resistant rootworm larvae were the offspring of adults collected from the ABE field during 2017. Because, these larvae were the siblings of those attacking the plants in the field efficacy trial, we expected similar results.

Corn hybrids were obtained from the respective trait licensees and greenhouse-grown singly in 1-liter cups. When plants reached the V5-V6 stage, they were each inoculated with n=10 newly-emerged larvae. Twelve cups were inoculated for each of the six treatments, for a total of n=72 cups per rootworm population. Inoculated cups incubated for 17d at 25°C before transfer to Berlese funnels to recover surviving larvae. The bioassay was replicated twice. 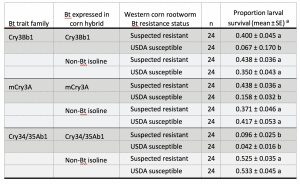 Survival of larvae from the suspected-resistant, Urbana population on Cry3Bb1- and mCry3A-expressing corn was significantly higher than the Bt-susceptible population. The Urbana population survived as well on the Cry3 hybrids as they did on the non-Bt isoline hybrids indicating that they were resistant and had little if any susceptibility to either of the Cry3 proteins. In contrast, survival of larvae from the same population on Cry34/35Ab1-expressing corn was low and did not differ from that of Bt-susceptible WCR populations indicating that the Urbana field population was susceptible to the Cry34/35Ab1 toxin.

Results from field efficacy trials and Bt-resistance bioassays suggest that the Urbana, Illinois western corn rootworm population is susceptible to the Cry34/35Ab1 toxin, but resistant, or nearly so, to the Cry3 toxins (i.e. Cry3Bb1 and mCry3A).  Based on these data, growers anticipating economic populations of western corn rootworm should select Bt corn hybrids (pyramided hybrids) that express the Cry34/35Ab1 toxin. Whenever possible, rotating to soybean (a recommended Best Management Practice or BMP) should also be a first choice when an economic population is anticipated. The Urbana population’s minimal susceptibility (only in the field efficacy trial) to Cry3 toxins was too low to prevent significant injury to single trait hybrids and did not add to the efficacy of the Cry34/35Ab1 toxin expressed in pyramided corn hybrids.

Conclusions. Local populations of western corn rootworm in east central Illinois are still mostly susceptible to Cry34/35Ab1, despite the recent confirmation of resistance to this toxin in Iowa. The efficacy of pyramided hybrids in our area is largely dependent on this toxin, as local populations are mostly resistant to the “Cry3” toxins.  Western corn rootworm abundance monitoring is the first step when initiating an integrated pest management approach to corn rootworm. Rotating with a non-Bt alternative (e.g. non-host soybeans, a seed treatment or liquid/granular soil-applied insecticide) rather than using a Bt hybrid in every field every year helps to preserve the efficacy of Bt traits. When a Bt hybrid is used, planting pyramided Bt corn hybrids that express Cry34/35Ab1 is also an appropriate response. Finally, when field-specific monitoring indicates that rootworm populations will be below economically damaging levels in continuous or rotated cornfields, forgoing rootworm control helps to prevent needless selection of Bt-resistant individuals.  Using pest monitoring to guide selection of the appropriate management techniques fosters long-term strategies that are justified by data and responsive to field-specific pest threats.

Given evidence for field-evolved resistance to Cry3 and/or Cry34/35Ab1 traits elsewhere in the Corn Belt, it is important to protect local Bt trait efficacy by adopting IPM-based approaches. Remember that local adoption of BMPs can help mitigate resistance in problem fields. When the next generation of rootworm protection products reach the market, the new RNAi-based mode of action is slated to be pyramided with existing Cry3Bb1 and Cry34/35Ab1 Bt traits in a product called “SmartStax®Pro”. Careful stewardship of current Bt traits is in the best interest of growers. Not only does it preserve the remaining management options, but it will help to prolong and reinforce the efficacy of new products.