skip to Main Content
Aaron Hager
May 5, 2016
Recommended citation format: Hager, A. "What is That Yellow-Flowered Plant?." Department of Crop Sciences, University of Illinois at Urbana-Champaign, May 5, 2016. Permalink

The springtime color scheme provided by winter annual weed species in many no-till fields has shifted from the hearty purple of flowering henbit and purple deadnettle to the bright yellow flowers of two species.  Yellow rocket and cressleaf groundsel (a.k.a. butterweed) both produce bright yellow flowers and are common across much of the southern half of Illinois.  Although flower color is similar, the plants are distinct species.  Most of the yellow-flowered plants currently in fields is butterweed.

Native to the United States, butterweed (Packera glabella) can be found from Texas east to Florida, northward along the Atlantic coast to Virginia, and west to Nebraska.  Herbarium specimens from the Illinois Natural History Survey indicate that butterweed specimens were collected in Illinois as early as 1932.  The earliest herbarium specimens of butterweed generally originated from counties in southern Illinois.  During the 1980s and 90s, the Illinois Natural History Survey augmented their collection with specimens from more northern counties, such as Champaign and Vermillion.  While scouting fields in Kankakee County recently, butterweed was easy to find.  Typically favoring moist to saturated soils, butterweed thrives in areas such as wastelands, pastures, fence-rows, and roadsides.  With the increased adoption of no-till and reduced tillage conservation practices, butterweed has become more prevalent in areas devoted to agronomic crop production.

Butterweed completes its life cycle within one year (an annual growth habit).  Field research was conducted from fall 2004 through spring 2006 at the University of Illinois to determine the emergence timing and growth characteristics of butterweed in no-till fields.  Butterweed emergence was predominately during the fall months and was essentially completed by November, although some emergence occurred in the spring.  From these results, we generally consider butterweed to be a winter annual species.

Following emergence, the formation of rosettes occurs prior to overwintering.  The rosette leaves have petioles that connect the leaves to the stem.  Often the under side of the rosette leaves are deep purple.  Bolting (stem elongation), flowering and seed production occurs the following spring, often during late April to early May.  The stem of butterweed is glaborous and hollow.  After bolting, petioles are absent from leaves on the upper part of the plant.  The leaves are pubescent, generally irregular in shape, and are deeply cut to the midrib.  The elongated stem often has a purplish tint. A member of the Asteraceae family, butterweed produces two types of composite flowers.  The outside portion of the flower contains ray florets while the center part contains disk florets.  The flowers are bright yellow and grouped in clusters that are located on several flowering stalks of the plant.  Seeds are easily disseminated via wind due to the white hairs (pappus) on the apex of the achene.

Yellow rocket (Barbarea vulgaris) is a winter annual species in the mustard (Brassicaceae) plant family.  The plant can produce numerous stems that grow from a basal crown surrounded by a rosette of deeply green leaves.   These basal leaves range in length from approximately 2–8 inches and have a large terminal lobe that is somewhat heart-shaped at its base.  Stem leaves are arranged alternately and become progressively shorter toward the top of the plant.  Flowers are produced on spike-like racemes and consist of four petals that form a cross.  Seed pods (siliques) are about 1 inch long and nearly square in cross section. 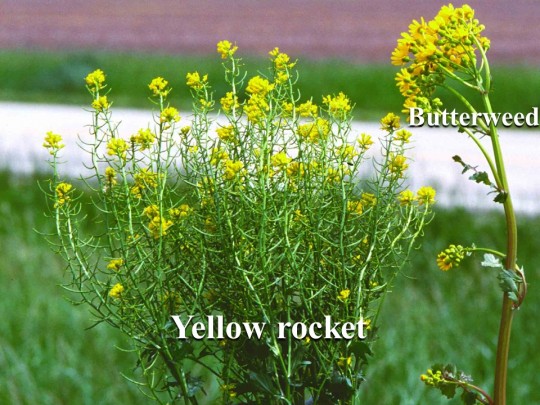 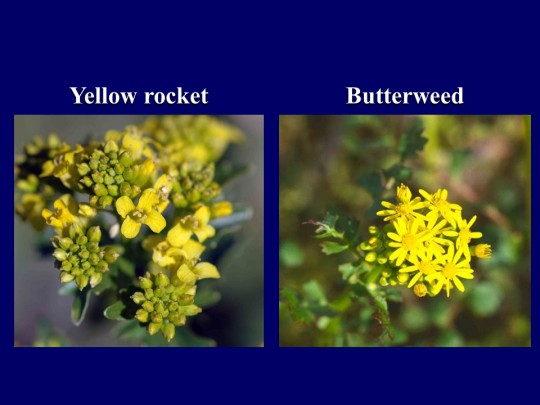