The continual evolution of weed species and populations resistant to herbicides from one or more site-of-action groups represents one of the most daunting challenges facing weed management practitioners.  Waterhemp has evolved resistance to herbicides from more site-of-action groups than any other Illinois weed species, including resistance to inhibitors of acetolactate synthase (ALS), photosystem II (PSII), protoporphyrinogen oxidase (PPO), enolpyruvyl shikimate-3-phosphate synthase (EPSPS), hydroxyphenyl pyruvate dioxygenase (HPPD), and synthetic auxins.  The University of Illinois weed science program recently announced confirmation of waterhemp populations resistant to Group 15 herbicides (Table 1), the first such confirmation of resistance in a dicot species to herbicides from this group.  Not every individual waterhemp plant is resistant to one or more herbicides, but the majority of field-level waterhemp populations contain one or more types of herbicide resistance.  Perhaps even more daunting is the occurrence of multiple herbicide resistances within individual plants and/or fields.  Waterhemp plants and populations demonstrating resistance to multiple herbicides are becoming increasingly common and greatly reduce the number of effective herbicide options.

When a Group 15 herbicide is applied to the soil in a field with a resistant waterhemp population, the initial level of waterhemp control sometimes appears to be comparable to that of a susceptible population.  So, is there actually resistance to Group 15 herbicides?  A description of how the magnitude of resistance is determined and application rates of soil-residual herbicides might be helpful to answer this question.

Weed scientists characterize the magnitude of resistance (i.e., how resistant the plants are to the herbicide) by conducting a dose-response experiment in which a range of herbicide rates (often 8 to 10 rates, some more than and some less than a typical field use rate) is applied to the suspect-resistant population and to one or more populations known to be sensitive.  Dose-response experiments are most commonly conducted by spraying a foliar-applied herbicide directly onto plant foliage, but these experiments also can be conducted with soil-residual herbicides applied to soil containing seeds of the populations of interest.  At some time after application (often 14 or 21 days), a measure of plant response (percent injury, mortality, plant dry weight, etc.) is made for both populations, and a statistical equation is used to determine the herbicide rate that reduced the measured parameter by some value (frequently 50% is used for comparison).  The rate derived from the resistant population is divided by the rate derived from the sensitive population, and the quotient is referred to as the resistance ratio; the higher the resistance ratio, the greater the magnitude of resistance to that particular herbicide.  Table 2 presents actual resistance ratios for two Illinois waterhemp populations resistant to Group 15 herbicides.  The R/S ratios indicate the populations demonstrate the greatest resistance to S-metolachlor, followed by dimethenamid and pyroxasulfone/acetochlor.

One might be tempted to argue this discussion is irrelevant since field-scale applications of soil-residual herbicides are not made at rates low enough to discriminate between resistant and sensitive plants.  A portion of that argument is valid, but keep in mind that once a herbicide enters the soil environment it begins the process of degradation.  At some point during the course of its degradation, the amount of herbicide remaining in the soil will correspond to these discriminating rates.  The amount of time required for a particular herbicide’s degradation process to reach these discriminating rates depends upon many soil- and environmental-related factors (such as soil texture, organic matter content, moisture, pH, etc.).  At that discriminating dose, only resistant plants will emerge.

Group 15 herbicides, whether applied at planting or with a postemergence herbicide after crop emergence, will continue to be important weed management tools.  The evolution of resistance to this important class of herbicides should serve as another warning that herbicide stewardship is as important as herbicide/trait selection.  Selection for herbicide resistance occurs each time a herbicide is applied, regardless of the herbicide or whether it is applied to the soil or plant foliage.  However, the overall intensity of selection for resistance to any particular herbicide or site-of-action group is reduced when multiple and different tactics are used to control the weed population. 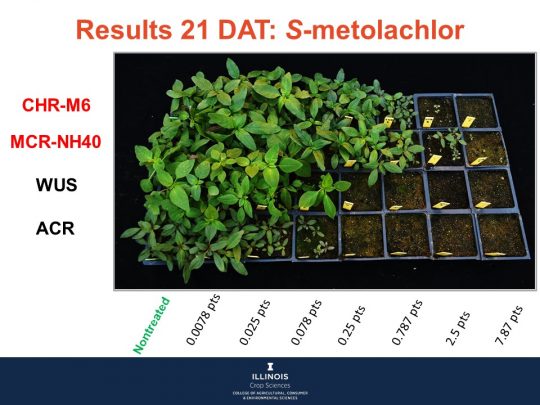